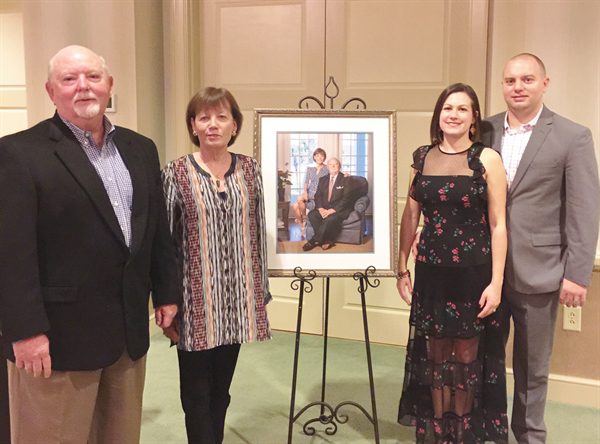 CONWAY, SC – Philip and Trish Clayton were recently inducted into the Conway Medical Center Foundation’s Legacy Society in honor of the Clayton Family Endowment.  A portrait of the Claytons now hangs in CMC’s Legacy Hall recognizing their contributions.  Philip Clayton was employed by Conway Medical Center (CMC) for 37 years and served as President and CEO of CMC from 1992 to 2017.

The Clayton Family Endowment was seeded in January of 2012 with the purpose of recognizing that excellence and the highest levels of patient care are driving forces at Conway Medical Center.  A portion of the fund’s earnings will be distributed annually to ensure excellence in patient care.

Terry Egan, Executive Director of CMC Foundation said of the Claytons, “The Clayton Family Endowment speaks volumes to Phil Clayton’s leadership by example.  The fact that the fund was established to ensure excellence in healthcare is indicative of Phil Clayton and the values he instilled during his nearly three decades as President and CEO of Conway Medical Center.”

The CMC Foundation’s Legacy Society is a special group of donors whose gifts offer a stable source of funds for long term support of CMC and the hospital’s continued efforts to bring better health to life for the people in the community.  Over the years, many generous businesses, organizations, families and individuals with ties to CMC, have established endowments through the CMC Foundation in honor or memory of a loved one to support a variety of the Medical Center’s programs and services. These special gifts serve as a permanent legacy to create a positive impact on the quality of life and health of the community for generations to come.

CMC’s longest serving employee to retire after more than 50 years!